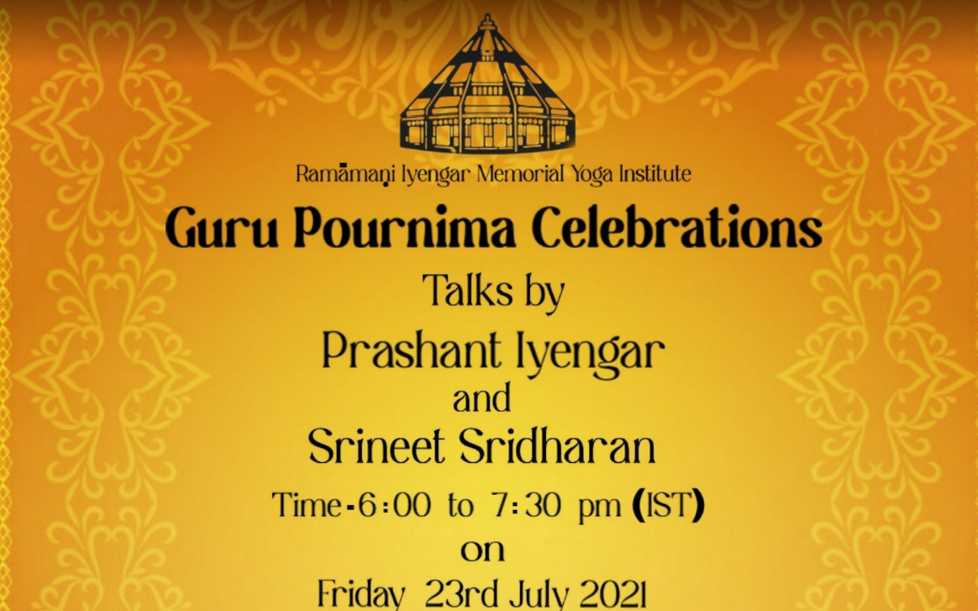 For 2021, Guru Pournima arrived 23 July 2021.  Via YouTube from the Ramamani Iyengar Yoga Memorial Institute in Pune, India, students around the world were able to join in this community homage to our teachers, in particular, our Guruji, B.K.S. Iyengar.

Carole Carpentier, a student in Toronto, Canada, took part in this event, and shares an overview below.

On this auspicious day of Guru Pournima, at the full moon of July, Prashant Iyengar and Srineet Sridharan offered us some thoughts on the subject of the ‘guru’. Srineet is the grandson of B.K.S. Iyengar. He explained the origin of Guru Pournima.  He told us that in earlier times, seekers of knowledge would wander throughout the land for most of the year, but would settle down in one location, an ashram or similar place, to wait out the rainy season. In this settled place, they would continue to seek and share knowledge. Guru Pournima came to be recognized as the first day of this settled period. So, it is on this day that we pay homage to those who guide us in the search for knowledge… our teachers and gurus.

You can read a more detailed version of this story at the Upanishads.org website:

Srineet also described how his entire life he has observed his grandfather, his aunt Geeta and his uncle Prashant constantly studying and exploring the world of yoga and the world of the self. Prashant, the son of B.K.S. Iyengar, discussed the different types of gurus that influence us over our entire lives.  Among these are parents, teachers of various sorts, and spiritual guides.  He further expanded on the aspect of knowledge as a continual exploration of the self. In particular, he described his father’s lifelong study and quest for knowledge and understanding. He ended with the thought that he was certain that his father was continuing this quest in whatever form his new life has taken.

And, courtesy of the Iyengar Yoga Institute of New York:

In honor of Guru Purnima, we pay homage to Guruji B.K.S. Iyengar.