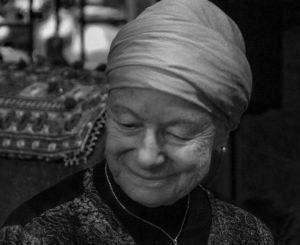 Maureen Carruthers, of Vancouver BC, was perhaps one of the earliest yoga practitioners in Canada to be introduced to Iyengar yoga. She has written a memoir of her first exposure to yoga and her experience of the early days of Iyengar yoga.  Below is an excerpt from that memoir.

One of the books we learned from was B.K.S. Iyengar’s Light on Yoga.

It was during that period I had the good fortune to meet Donald Moyer in 1974. Donald had recently arrived in Vancouver from London, England, and brought with him an understanding and practice of yoga that he had learned from his teacher, Penny Nield-Smith; she in turn was a student of the great master from Pune, India, B.K.S. Iyengar. It was Donald’s practice and knowledge of yoga that inspired me to start working deeply with this method, and to begin teaching it to others. He happened to be in my house taking a pottery class and he could also see into the room where I was practising my yoga asanas. I was practising Utthita Trikonasana and Donald could see that I had not been taught this pose well, according to the understanding and depth that had come down from the master, B.K.S. Iyengar. So with kindness and understanding, he began to show me the alignment of the pose. What a blessing! What a gift! The deeper awareness of yoga that Donald gave me opened up a new world for me, and marked the beginning of my commitment to the Iyengar method of yoga, from which I have never turned back.

The full memoir is available on the website of the B.K.S. Iyengar Yoga Association of Vancouver. You can read it here.