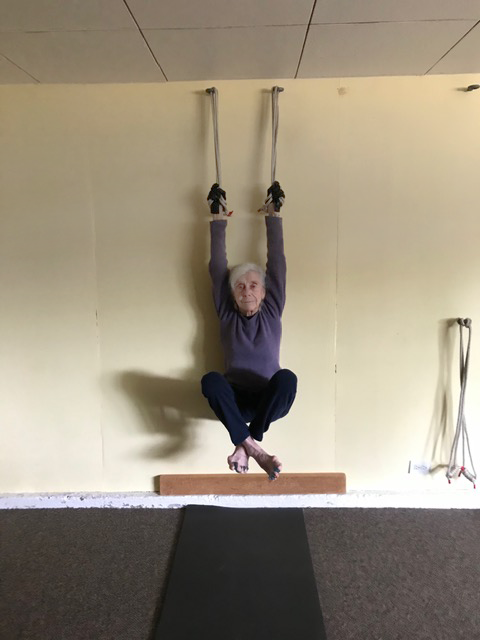 Intelligence, when awakened says: What a fool I’ve been!

– Shirley Daventry-French, of Victoria BC, reminds us of these words from B.K.S. Iyengar in Pune in December 2003. Below, she reflects on the importance of intelligence and consciousness in our yoga practices.

Closing a class, I would encourage students to practise what they remembered during the following week. Next class, I would begin by enquiring if they had any questions arising from their practice. This allows a teacher to clear up confusion and decide what needs clarification and repetition. Such enquiry and observation are an important element of good teaching.

One week, a regular student who was trying to establish a Pranayama practice said that as she prepared to begin, she found herself confused about which props she should use and how to set them up. I encouraged her to simply lie down and breathe!

On one of my early visits to Pune, Guruji was teaching Pranayama each day for four weeks.  It was a big group of experienced students. Props, particularly blankets, were in short supply, so we were told to lie down on our backs with a blanket under the head and breathe. He proceeded to develop the class from this starting point, and we worked this way whenever we did supine Pranayama.

Many years later, as he approached his 85th birthday, he gave a special course before the celebrations. On the first day, he reminded us that whilst Asanas are performed by the body, they are not for the body. They are for higher consciousness! He went on to teach a class focusing on how to raise consciousness without props. Lest we went home and threw out all our yoga props, the second day, the focus was on how to use props to raise consciousness. Raising your consciousness is the prime purpose of yoga.

My husband has been part of a men’s group for many years. We were born six months apart in the same calendar year, and our family threw a joint party for our 80th birthdays. This men’s group were all there, and as I was standing there chatting to them, a friend joined us who had been part of  a women’s group with me in the 1970s. We grandly called it a Consciousness Raising Group. When I introduced my friend to the men, I told them this, and added that it no longer functioned because “we had raised our consciousness.” Everyone laughed!

I wish it were that simple!

I neglected to tell them that over a very short period in addition to starting this group, I tried Tai Chi, Mindfulness Meditation, Encounter Groups; helped establish a free school based on Summerhill in the UK; served on the executive of a political party; joined a Status of Women action group. Most important, as it turned out, I took a yoga class and began to practise on my own.

During the special course for his 85th birthday, Guruji spoke frequently about yoga practice as a means of removing our ignorance, adding that ignorance (avidya in Sanskrit) never goes to sleep, even after death.

Before practising you have to learn something about yoga. Find a reliable source using whatever means is available to you. Search for a skilled teacher. Virtual classes serve a purpose during this pandemic, but far preferable is a class where the teacher is with you in person. Acquire some knowledge, practise on your own and sustain it. Then yoga becomes not just routine, but a priority: a spiritual practise which you can adapt and adjust from reliable feedback within yourself and awaken your intelligence.